The first thing I did after getting home from touring this house before we bought it was to pull out some graph paper and start sketching up a new kitchen. The possibilities that a new kitchen presented, and the radical transformation that would mean for the house were what really got me initially excited about buying this place. It took almost three years but we’re finally getting around to undertaking that project.

Of course a lot of things sprang up once we bought this house that were far more pressing than a dream kitchen renovation. We undertook a major bathroom renovation. We installed a sprinkler system ourselves. We built hundreds of feet of fence. We tore down bushes and killed off ivy and built and grew a garden. The dream of remodeling the kitchen never died, but it certainly took a back seat to the far more practical issues facing us as the proud owners of a fixer upper.

As is our way, the motivation for actually pulling the trigger on the great kitchen renovation of 2012 (please let it just be 2012) came pretty much out of the blue. I got an idea for a revised layout. I sketched it up and showed Anne. We crunched some numbers and came to the conclusion of “why not?” Over a day or so, the kitchen renovation went from being a “someday” plan to a “holy crap this is really going to happen” plan. It’s the way we roll with most things.

Our current kitchen is a perfectly serviceable, albeit somewhat cramped, galley-style layout: sink and dishwasher on one side, oven, range, fire-hazard microwave and refrigerator on the opposite side. 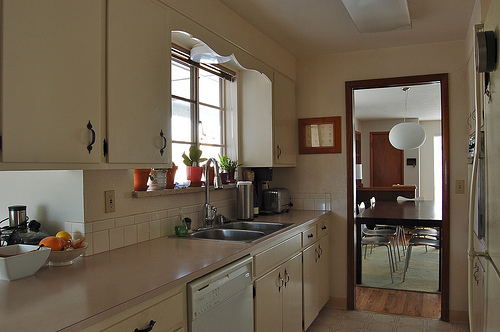 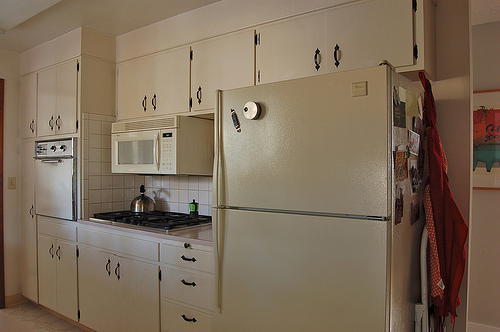 The original layout idea, from when we first saw the house, was to simply rearrange the existing elements in the existing space for a better feel. We’d move the wall oven down to where the refrigerator is now, rotate the refrigerator opposite that, and then have more open space towards the front. We’d take down part of the wall where the cooktop currently is and end up with a bit of an island open to the hallway.

It was a nice idea initially, but not the great. It didn’t create any new storage for us (which we’re in desperate need of) and while opening up the kitchen a bit is worth doing, opening it up to the hallway is of questionable value since we have a bathroom about half way down the hall so we wouldn’t want the kitchen island overlooking the door to the bathroom, which means we’d only end up with a few feet of open island. A lot of work for not a lot of improvement.

The “aha!” moment with the new layout came once we realized that we could make use of the perpendicular hallway at the end of the kitchen to take the layout from having two elevations to three. By moving the refrigerator to that new third wall, and flanking it on either side with tall pantry units, we gain extra storage in spite of shifting the hallway into the footprint of the existing kitchen a bit. We’ll replace the cooktop and wall oven with one integrated range unit, so moving the refrigerator and getting rid of the current wall oven create more counter space in our new layout as well. We end up with some traffic patterns through the kitchen, but those patterns already exist and in a small house there’s not much way around them. We’re okay with it.

While we’re finally getting around to documenting this process and project here, it’s been going on for a couple of months now already (since November). A lot of layout iterations have been toyed with in order to maximize workflow, storage, aesthetic, etc.

In general the major elements are staying in roughly the same places. Plumbing stays where it is. The gas and electrical for the range stay where they currently are. We have to add new electrical and plumbing on the refrigerator wall, but that’s mostly the extent of those changes (minus moving a few light switches around).

After probably hundreds of hours spent thinking about this, here’s what we’ve settled on… 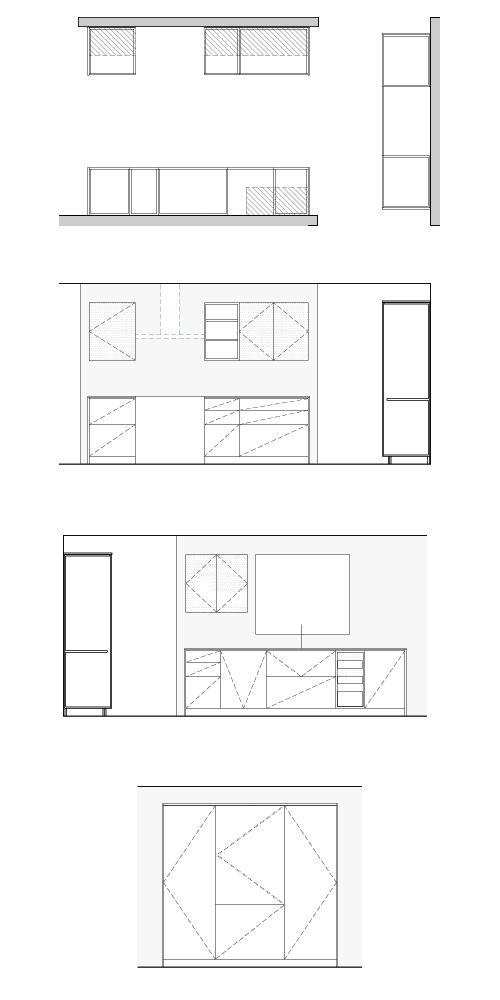 Demo should commence in late July June. There are lots of other details (cabinetry, appliances, finishes, etc) to discuss here in the meantime so stay tuned.