This little sweetie pie right here has been full of surprises lately. 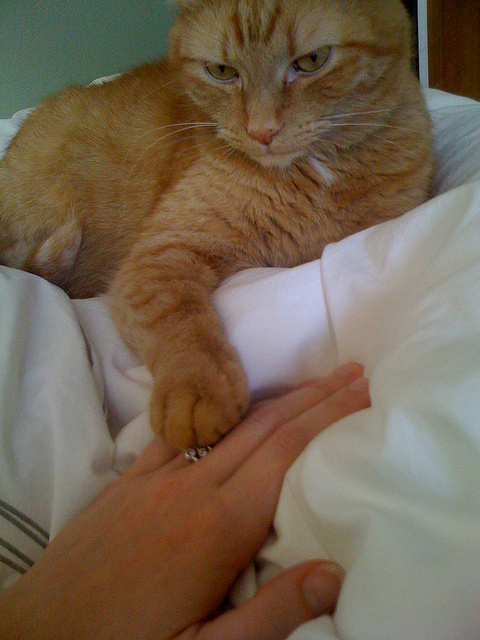 Because Khanyo is so stinking cute I poured him his own tiny bowl of milk yesterday while I made a cappuccino for me. He got super excited about his treat and lapped it up.

Khanyo thanked me for his milk treat by projectile vomiting it off our bed for maximum coverage on the floor. He was thorough and got some on the bed too. And for good measure, he ran off to continue his barf-fest on the carpet.

Since revenge is best served cold I took Khanyo to the vet this afternoon. Granted, this was a pre-planned event, but Khanyo didn’t need to know that.

The vet visit did not go smoothly. I thought we’d show up, Khanyo would get shots, I’d get scolded for his fatness, and we’d be on our merry way.

In reality I got scolded for his fatness but there was no merry way after that. Khanyo lost his mind after the rectal thermometer. There had been some mild posturing & hissing before to make sure the vet knew who he was dealing with. After the indignity of the thermometer though, Khanyo went to some primitive, wild place where cats gnash their terrible teeth and roar their terrible roars. At one point, the vet gave Khanyo a paper towel roll to attack as a distraction, which he whole heartedly sunk his teeth & claws into. Back-up was called, restraint holds were applied and shots were given.

After all that, the vet asked me if I was okay, and of course I was fine. I was worried about the vet & tech since they’d just gone into the ring with my wild beast of a cat. And they didn’t come out unscathed. There was blood on the tech’s hand! They assured me that Khanyo was not the worst behaved cat they’d ever dealt with, which I secretly hoped was true as I embarrassedly hauled my cat out to the car in his carrier.

And now I need to think of some sort of peace offering to give Khanyo so he doesn’t try to one-up my revenge. ‘Cause I can’t handle the amount of bodily fluids that he would deem adequate pay-back.